What is going on in the corn field from planting until the growing point emerges?

Well, after the corn is planted, there are many things that happen before the corn seedling emerges from the soil. There are several things that need to come together to have good, uniform seedling emergence. They are good moisture, warm temperatures, and good seed-to-soil contact.

The first thing is the seed imbibes water. That basically means, the seed is absorbing water. This water update happens rapidly through the tip of the corn seed and slower through the seed coat. Therefore, the seed's embryo (white area of the corn seed) moistens first, followed by the endosperm. The endosperm is the starchy portion of the seed. It is generally covered by the yellow portion of the seed coat.

The seed will absorb water until it is between 30 and 35% moisture. At this moisture level, hormones in the endosperm are activated and the seed is signaled to begin the germination process. The endosperm is often referred to as the food portion of the seed. This is because the starch and proteins in this area of the seed are turned into sugars and amino acids to supply energy to the growing embryo. Actually, a seedling can survive for up to 14 days from germination on energy supplied from only the endosperm.

The first two structures to emerge from the seed are the radical (root) and the coleoptile (shoot). Under good growing conditions, the elongation of the shoot begins within a day of the root emergence. These two structures grow in opposite directions. The coleoptile will grow approximately three-quarters of an inch. A white stem like structure then begins to push the coleoptile to the soil surface. This is actually the structure that sets the depth of the crown of the plant.

At this time, the crown of the corn plant is still below the soil surface. It actually doesn't emerge from the soil until the corn is roughly at the 6-leaf stage. If there is damage to the corn plant (like hail) until that time, the plant will continue to regrow from that crown area.

The answer is yes, in both dryland and irrigated soils. The root hairs continue to grow at the level(s) where water and oxygen are both available. There is some primary root growth, typically until mid/late August. 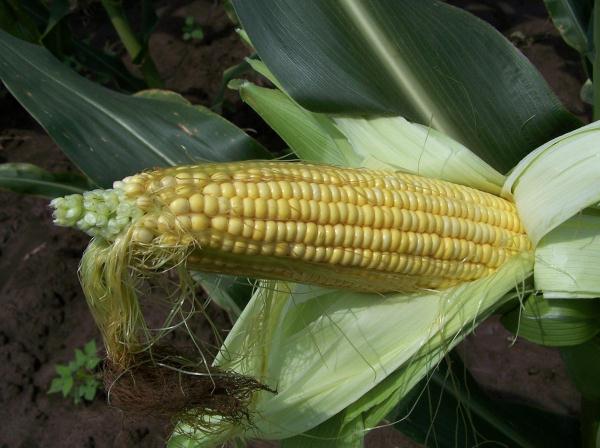 Of these two yield components, kernel number per row is more sensitive to environmental stresses. Row number, on the other hand, is fairly strongly determined by the variety's genetics and less so by the environment.

Severe drought stress, as indicated by continual or nearly continual wilting of the plant, affects the pollination process primarily by its effect on silk elongation. Silks begin elongating from the ovules of the ear shoot about 7 days prior to silking. The silks from the butt of the ear elongate first, followed by those from the central part of the ear, then the tip of the ear.

Inadequate plant water potentials can slow down silk elongation, resulting in delay or failure of the silks to emerge from the ear shoot. Silks that do emerge may desiccate rapidly when the plant is enduring severe moisture deficits, becoming non-receptive to pollen. Ironically, drought stress tends to accelerate pollen shed, often resulting in poor "nick" of the pollen and silks.

Corn has both male (tassel) and female (ear) flowers on the same plant. Male flowers on the tassel mature when anthers emerge from spikelet flowers, and pollen is dispersed through holes at the tips of the anthers. The tassel is usually fully emerged before any pollen is shed. Pollen shed begins at the middle of the central spike of the tassel and spreads out later over the whole tassel with the lower branches last to shed pollen.

The outer membrane of a pollen grain is very thin. As a result, high temperatures and low humidity can similarly dessicate pollen grains once they are released from the anthers of the tassel.

Growers often worry about the direct effects of high temperatures on the viability of the pollen grains. Indeed, pollen is likely damaged by mid-90's or greater temperatures, especially when accompanied by low relative humidity. Temperatures over 100 degrees may literally kill pollen.

Pollen shed usually begins two to three days prior to silk emergence and continues for five to eight days with peak shed on the third day. All of the pollen from a single anther may be released in as little as three minutes.

The saving grace of the matter, however, is that pollen shed typically occurs during early to mid-morning hours before temperatures climb to such dangerous heights. On a typical midsummer day, the shedding of pollen is in the morning between 9:00 and 11:00 a.m. Cool, cloudy, humid conditions will delay the onset of daily pollen shed. Furthermore, pollen maturation occurs over time and 'fresh' pollen is available every morning until maturation is complete. Because of natural field variability in plant development, a whole field may take as long as 14 days to complete pollen shed.

Female flower parts on the ear include the ovule (kernel) and stigma (silk). Silk elongation begins 7 to 10 days prior to silk emergence from the husk. Every potential kernel (ovule) on an ear develops its own silk that must be pollinated in order for the ovary to be fertilized and develop into a kernel. A well-developed ear shoot has 750 to 1,000 ovules (potential kernels) each producing a silk. However, under good conditions only 400 to 600 ovules will be fertilized and eventually produce kernels The silks from near the base of the ear emerge first and those from the tip appear last. Under good conditions, all silks will emerge and be ready for pollination within 3 to 5 days and this usually provides adequate time for all silks to be pollinated before pollen shed ceases.

Temperatures in excess of 95 degrees, especially when accompanied by low relative humidity, can dessicate exposed silks, but has little direct effect on silk elongation.

Under favorable conditions, a pollen grain upon landing on a receptive silk will develop a pollen tube containing the male genetic material, develop and grow inside the silk, and fertilize the female ovary within 24 hours. Pollen grains are borne in anthers, each of which contains a large number of pollen grains. The anthers open and the pollen grains pour out after dew has dried off the tassels. Pollen is light and can be carried considerable distances (up to 600 feet) by the wind. However, most of it settles within 20 to 50 feet. Pollen shed is not a continuous process. It stops when the tassel is too wet or too dry and begins again when temperature conditions are favorable. A pollen grain stands little chance of being washed off the silk during rain storms as little to none is shed when the tassel is wet. Also, silks are covered with fine, sticky hairs that catch and anchor pollen grains. Pollen of a given plant rarely fertilizes the silks of the same plant. Under field conditions other plants in the field pollinate 97% or more of the kernels produced by each plant. The amount of pollen is rarely a cause of poor kernel set. Each tassel contains from 2 to 5 million pollen grains, which translates to 2,000 to 5,000 pollen grains produced for each silk of the ear shoot. Shortages of pollen are usually only a problem under conditions of extreme heat and drought. Poor seed set is more often associated with poor timing of pollen shed with silk emergence (silks emerging after pollen shed).

There are two techniques commonly used to assess the success or failure of pollination. One involves simply waiting until the developing ovules (kernels) appear as watery blisters (the "blister" stage of kernel development). This usually occurs about 10 days after fertilization of the ovules.

Another more rapid means can be used to determine pollination success. Each potential kernel on the ear has a silk attached to it. Once a pollen grain "lands" on an individual silk, it quickly germinates and produces a pollen tube that grows the length of the silk to fertilize the ovule in 12 to 28 hours. Within 1 to 3 days after a silk is pollinated and fertilization of the ovule is successful, the silk will detach from the developing kernel. Unfertilized ovules will still have attached silks. Silks turn brown and dry up after the fertilization process occurs. By carefully unwrapping the husk leaves from an ear and then gently shaking the ear, the silks from the fertilized ovules will readily drop off. Keep in mind that silks can remain receptive to pollen up to 10 days after emergence. The proportion of silks dropping off the ear indicates the proportion of fertilized ovules (future kernels) on an ear. Sampling several ears at random throughout a field will provide an indication of the progress of pollination.

Note: A portion of this article was originally written by Dr. Joe Lauer, UW Extension Corn Agronomist, for the Wisconsin Crop Manager Newsletter in July, 1998. The remainder of the article was written by Dr. R.L. (Bob) Nielsen, Agronomy Department, Purdue University.