Limited irrigation may be a fact that many producers are facing. It should be noted that most irrigation systems in Kansas are generally not designed to meet peak crop ET (evapotranspiration), but at a level that maximizes water resource usage (Dr. Dan Rogers, K-State Irrigation Engineer). One item that is always discussed is minimizing stress on corn plants at critical times. Here is a discussion of those critical times and the effects they have on corn yield.

Why "flowering time" is critical or important for the final grain determination?

Two weeks before and after pollination is when the final grain number will be determined through a sequence of processes taking place in the female reproductive structure of the corn plants. Before this stage, ear size has already been determined at the five-leaf to fifteen-leaf stage interval. That will play a critical role in defining the final yield, the ear size.

Why "ear size" is an important component for the yield determination in corn?

The size of each individual ear is set during the 5- to 15-leaf stage of growth. This will define the maximum potential number of grains per plant (if the plant carries only one ear) through the determination of the number of ovules that can be fertilized. Thus, the "potential kernel number" is determined before the pollination occurs. The final kernel number will be physically restricted- small ears have less space for bearing grain.

Why "pollination time" is important for corn?

The success or failure of pollination will determine the number of fertile ovules that will develop into actual kernels. However, even if an ovule was fertilized that doesn't guarantee it will develop into a kernel of grain by the end of the season. The tassel produces pollen grains with more than a half million shed per day at the peak. Pollen shed for a field typically lasts for about a week. Two weeks after pollination, abortion of the fertilized ovules can take place within the corn ears. Thus, the final kernel abortion rate during that period will ultimately determine the actual kernel number to be attained at maturity. The kernel abortion rate is highly influenced by any biotic or abiotic stresses (e.g. pest pressures, hot temperatures, drought, insufficient N supply, etc). As the stress intensifies, the abortion rate increases.

This graph shows the variability of evapotranspiration throughout the season. Corn can use 24-30 inches of water throughout the season (ET). During much of the growing season, the typical irrigation capacity required is 0.35 inches per day. However, the daily peak usage can be 0.50 inches per day or higher. For limited irrigation systems, think about limiting stress during these critical periods by anticipating them and applying the water just prior and during the critical periods to help lessen effects on corn yield. 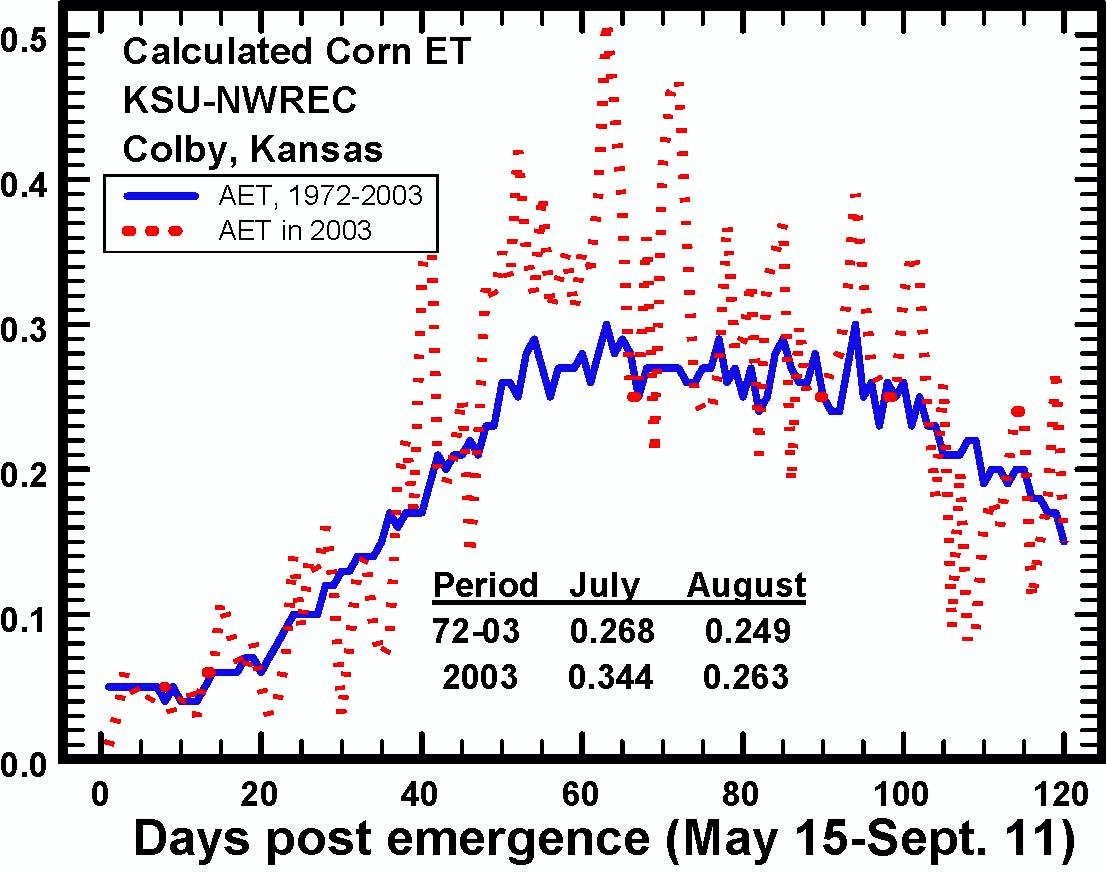 Limited water in our environment is a given, whether in a dryland or irrigated system. However, we can manage the soil and water content to our benefit. Limited water is at the forefront of many producers' minds. Many cases of limited water spur from physical limitations, where the irrigation system can't keep up with the crop needs. In other cases, it is an institutional limitation, such as the LEMA enacted in Sheridan 6, where producers can pump 55 inches of irrigation water over a 5 year period.

Now why is that important? Let's compare wheat and corn. For wheat, it takes 10 inches of water to grow a vegetative plant and move a plant into the seed producing portion of the life cycle. For corn, this value is 10.9 inches. If we have a full profile (8 in of water in 4 feet), it is close, but not quite enough to help grow both a corn and wheat. The good news is that most of the time we are getting moisture to help grow this plant.

The next stage of the plant's life cycle is important and how it utilizes the water available. For wheat, we get 6 bushels per acre of wheat for 1 inch of soil moisture. For corn, 16.9 bu/ac for each inch of water. Therefore, we get more yield per inch of water from corn. However, under dry conditions, the wheat plant will enter it's reproductive stages with less water than corn. Hence, why wheat is considered more drought tolerant than corn.

For other drought tolerant crops, the values to grow a plant are even lower. To grow a plant to the reproductive stages, it takes 5.4 and 6.9 inches with sunflower and grain sorghum, respectively. Then for each additional inch of water, sunflowers produce 218 lb/ac and grain sorghum produces 12.2 bu/ac. It should be noted, that several yield components are being set during the time that most people would call 'vegetative'. For example, head size is being determined at jointing at wheat.

Thankfully, we do not just rely on stored soil moisture to feed crops throughout the growing season. The wettest months are May, June, July and August. The moisture received during this time coincides with the times of peak water useage of crops.

When you are finishing your cropping plans, keep in mind how much water it takes to grow a plant and where your farm is for stored soil moisture. Charts with these values are available on our website at www.sunflower.ksu.edu and click on the Agronomy tab.

As you drive around the countryside, you will see many irrigation pivots running. They are not watering wheat, but rather ground that is going to corn this spring. There are differing opinions on the use of preseason irrigation.

Because the well capacities have dropped and the market place has changed, the K-State Research and Extension Center in Tribune conducted research on preseason irrigation, from 2006 to 2009. The objective of this study was to determine whether preseason irrigation would be profitable with today's lower capacity wells.