Reports of army cutworm infestations are not necessarily a cause for alarm. So far, many of the infestations in wheat are below the treatment level. But, it's something to watch and if necessary, consider treating in wheat, alfalfa, and canola. One of the main concerns at the moment is on seedling alfalfa, where the economic threshold is very low - just 2 per square foot. Canola should be treated when there is an average of two or more larvae per foot of row.

Wheat fields infested by army cutworms will look ragged. By late March, the cutworms will probably be larger and damage may be more extensive. Treatment thresholds will depend on the growth stage of wheat, the condition of the wheat, and infestation levels (described below in the "Wheat" subsection). 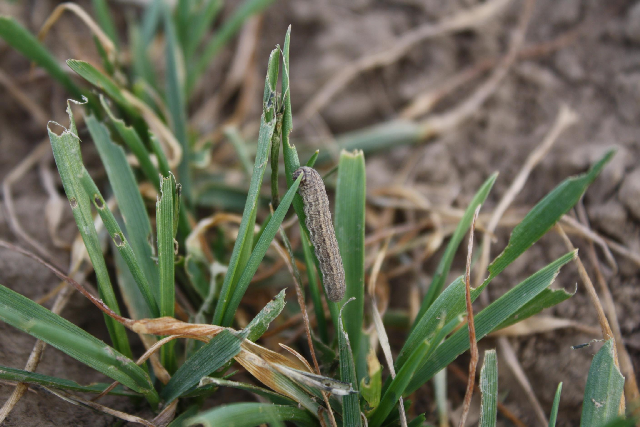 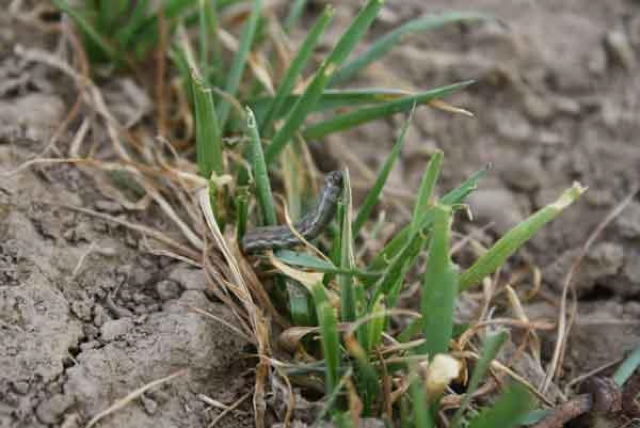 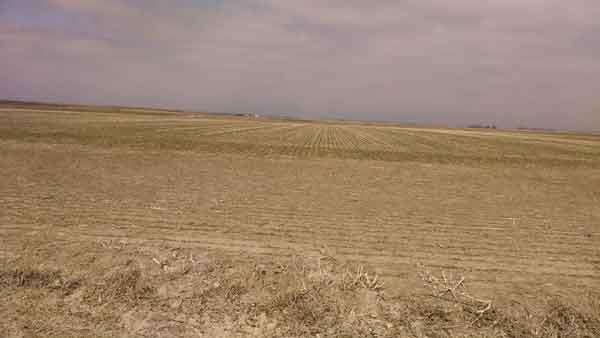 Figure 2. Wheat in Smith County on March 18, 2014. The field edges have been infested with army cutworms, and the tops of the plants were chewed. Photo by Sandra Wick, K-State Research and Extension, Post Rock District.

Army cutworms oversummer in the Rocky Mountains. They fly back to Kansas and surrounding areas in the fall and lay eggs in the soil. The eggs hatch either in the fall or early winter.

Army cutworms feed on a wide variety of plants including weeds, vegetables, fruit crops, oilseeds, and grasses. Plant-use patterns depend on where a female lays her eggs and what locally available alternatives larvae choose to eat. Despite being broad generalists, larvae may express strong feeding preferences among plant species and even among different wheat cultivars.

Often, if you see birds feeding in a wheat or alfalfa field this time of year, it is probably because of army cutworms. Birds have been known to effectively control army cutworms over a period of a few days.

In wheat, larval damange first appears as "windowpane" holes. Feeding by early instar larvae is inconsequential, resulting in barely noticeable windowpane damage to leaves - small, transparent rectangles of dead epidermis where larvae harve stripped away the lower leaf surface. Unlike some other cutworms, only above-ground plant parts are eaten.

In wheat, moisture availability, crop condition, and regrowth potential are all factors influencing potential losses to the army cutworm. Late-planted fields under dry conditions with poor tillering may suffer economic damage with as few as one or two larvae per square foot.

Larvae restrict feeding to the tender blades of wheat, tending to avoid the stems and crown or meristematic tissues that make regrowth possible. After larvae have exhausted local food supplies, they may form an "army" and move en-masse in search of other suitable host plants. Fortunately, once larvae either pupate or move on, affected wheat plants generally recover, although yields may be reduced if defoliation was severe.

In wheat, as few as two 1-inch or longer larvae per square foot may affect stressed, low-density stands, especially if larvae graze plants down to the root crowns. In these situations, a pesticide application will often yield an economic return. Most fields can usually withstand as many as four to five larvae per square foot before requiring treatment, whereas wheat under good growing conditions has been observed to withstand densities as high as 8 to 9 larvae per square foot without a measurable yield impact or an economic return on an insecticide application. Wheat plants in more advanced growth stages can withstand a great deal more defoliation than those in earlier stages.

These are general guidelines. Producers will want to take into account current market prices of wheat and opportunity cost compared to the cost of insecticides when determining the economic thresholds on their fields.

Larvae are easier to kill while they are still small, and early control will provide better damage prevention, as 70 percent of larval consumption occurs in the final instar.

Provided that soil moisture is adequate and plants are not stressed, established stands of alfalfa can usually compensate for army cutworm feeding using stored nutrient reserves. Otherwise, army cutworms may delay first cuttings or reduce yields. Newly planted alfalfa is at greater risk because heavy feeding can kill many seedlings before stand establishment. Early detection of an army cutworm problem is critical, and control (if required) is best accomplished with a late afternoon/early evening or early morning insecticide application when most larvae are above ground.

alfalfa also but always read and follow label directions and consult the K-State Extension Insect Management Guides for the crop of concern.

Army cutworms will also feed on winter canola. Canola should be treated when there is an average of two or more larvae per foot of row. It is important to scout canola fields for these insects. Army cutworms find canola very palatable, and 4 to 5 per square foot cause severe damage to stands. Stands can be completely lost if left untreated. Look for foliar tissue damage and severed green leaves lying on the ground as evidence of feeding. Damage may initially be more visible in areas of the field where stands are thin.

When making an insecticide application for army cutworms, be sure that temperatures will be above 50 degrees for three to four days after the application is made. Better control is accomplished with the proper amount of carrier as these worms will be in the soil. You have to get contact insecticides down to where the worms are, and if there is much foliage, you will need enough carrier to do that.