Aquifers in northwest Kansas: the Ogallala and the Dakota

Last week, I attended the Governor's Water Conference. There was a great deal of discussion on the governor's water plan and many other topics. One was the Dakota Aquifer. Questions regarding this body of water come up occasionally, so I thought I should address some of the common ones.

There are varying levels of salt concentration throughout the aquifer. The pattern of salinity is mainly dependent on the rate at which freshwater is able to flow down from above and the rate of salt water intrusion from the underlying rocks. In northwest Kansas, there is a thick aquitard (layer of fairly impermeable material, usually comprised of shale) that substantially slows the flow of water down into the Dakota. In much of western Kansas, the Dakota is called a confined aquifer because of the aquitard.

In Cheyenne and Sherman Counties, the quality of the Dakota aquifer is above 10,000 mg/L, with small areas over 20,000 mg/L of total dissolved solids (a general measure of salinity of water). Water with 10,000 mg/L is considered the upper limit for useable water because of its salinity.

In Wallace County, there is a gradient in the salinity of water. In northwestern quarter of Wallace County, it is above 10,000 mg/L. In south western part of the county, there is an area south of Weskan with levels that range between 500 – 1000 mg/L. Eastern areas of the county range from 1,000 to 5,000 mg/L. Water with less than 1,000 mg/L is defined as fresh. Water between 1,000 and 2,000 is useable for many purposes, but is less desirable than fresh water. 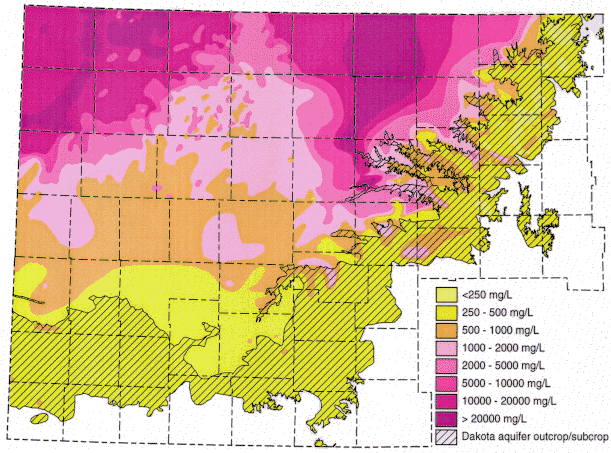 Figure 1. Distribution of total dissolved solids (TDS) concentrations in ground waters in the Dakota aquifer in western and central Kansas. Water less than 1000 mg/L TDS is defined as fresh. Water with 1000-2000 mg/L TDS is usable for many purposes but is less desireable than freshwater. A concentration of 10,000 mg/L TDS is defined in the state regulations of the Kansas Corporation Commission as the upper limit of usable water; above 10,000 mg/L a water is classified as unusable or mineralized. From Kansas Geological Survey.

It is important to note, that even where this water is considered fresh, the water is quite deep. In some areas in very northwest Kansas, the aquitard is over 2,000 ft thick. In addition, there are wells at over 1500 feet in depth, in west central Kansas.

A good resource (containing maps) can be found at the Kansas Geological Survey website at www.kgs.ku.edu/Dakota. I also found a nice summary at www.kgs.ku.edu/Publications/pic7/pic7_2.html. Links to these can be found on the K-State Sunflower District website www.sunflower.ksu.edu and click on the agronomy tab.