Populations of Palmer amaranth resistant to glyphosate were first documented in Kansas three years ago. At that time, these populations were limited in range to isolated areas of south central Kansas. Glyphosate resistant Palmer amaranth has gradually expanded the last couple of years, and now appears to be increasing rapidly, especially through the central part of the state.

Glyphosate resistance can be confirmed with greenhouse and laboratory tests, but at this point that is probably no longer necessary. If a few Palmer amaranth plants or patches of plants survived where glyphosate was applied at the recommended rate with the appropriate adjuvants and spray coverage was good, there is a good chance those plants are resistant. 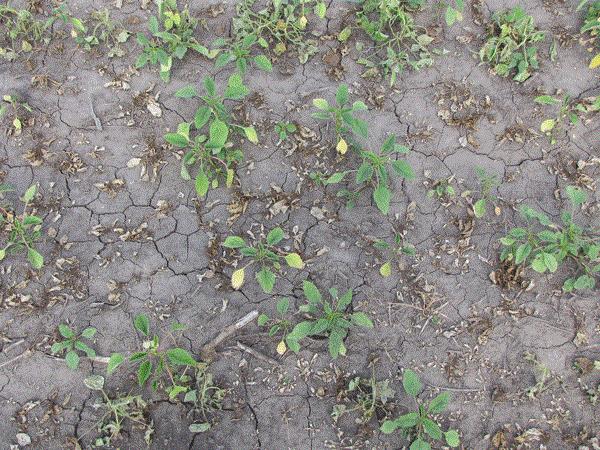 Figure 1. Surviving Palmer amaranth among dead plants treated with Roundup PowerMax at 32 fl oz/acre when plants were about 6 inches tall. Photo taken at Ashland Bottoms near Manhattan six days after treatment. Plants were confirmed to be resistant by an enzyme assay in the laboratory. Photo by Dallas Peterson, K-State Research and Extension.

Where glyphostate-resistant Palmer amaranth occurs, producers should plan on taking the necessary control measures. Another application of glyphosate alone probably will not help. It may be possible to use an alternative to glyphosate as a postemergence treatment in-season this year, although most postemergence alternatives are effective only on smaller plants.

In soybeans, the only alternatives would be PPO-inhibiting herbicides such as Cobra, FlexStar, Marvel, or Ultra Blazer. If there are just a few scattered plants, removing them by hand or other mechanical methods before they go to seed may help prevent them from spreading rapidly in the field. If those weeds remain growing in the field and set seed, the action of a combine will spread the seed throughout the field, as well as to other fields.

In fallow, it is best to use glyphosate as a tank-mix with 0.25 to 0.5 lb ae of 2, 4-D or dicamba. Treat fallow as soon as possible because the larger the glyphosate-resistant Palmer amaranth gets, the harder it is to control.

To attempt to very this one way or another, waterhemp and Palmer amaranth seed were collected in the fall of 2011 from various soybean and cotton fields in eastern and south central Kansas. These fields had abundant pigweed escapes after being treated with glyphosate. 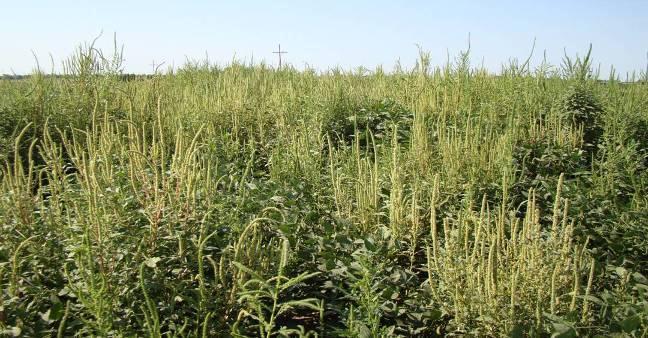 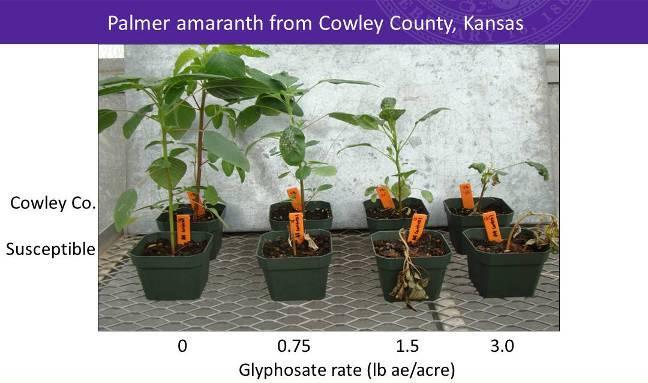 Palmer amaranth seed was collected from additional fields this past fall and is now being evaluated in the greenhouse. Preliminary observations suggest that we are seeing similar survival after glyphosate treatments from Palmer amaranth collected from fields south of Great Bend, along with additional populations collected south of Wichita. Research on inheritance and the mechanism of resistance will need to be conducted to further characterize and confirm glyphosate resistance in these populations. Confirming herbicide resistance is a long and detailed process.

Regardless of whether glyphosate-resistant Palmer amaranth is present in your area now, there is a good chance it will develop at some point based upon what has happened in the Southeast U.S., especially if growers rely heavily on glyphosate for weed control.