I am sure many of you are wondering about how your wheat handled the quite chilly conditions last week. I would say the short answer is 'probably' the wheat is OK. That answer might sound a lot like 'it depends'! Several factors can influence the effects of the cold temperature. That includes how well the plant has cold hardened, the depth of the crown in the soil, the development of the root system, and the overall health of the wheat plant.

There are a couple factors that I think are most concerning for us. Those are how far along the wheat plant is in the cold hardening process and the root system development.

Let's first discuss the cold hardening process of the wheat plant. This is the factor that is most concerning for me. The wheat plant begins it's cold acclimation process when the soil temperatures at the crown fall below 50 degrees. At that temperature, an anti-freeze like compound is generated in the plant near the cell membranes to prevent them from rupturing from freezing.

On the development of the wheat plant, Jim Shroyer, the retired wheat specialist, said that wheat has the best chance at winter survival when it has at least 2-3 true leaves, a tiller or two and a developed root system. This wheat development will have helped the plant to build up enough stored energy reserves to survive the winter. The seedlings will have a better chance of winter survival if their crowns are well developed in firm soil, about a half-inch below the soil surface. I mention this because I was a bit surprised when looking at wheat this last week. Some of it looked quite good from the top looking down. However, when I dug below ground to look at the roots, in some cases, there were not many roots developed from the crown of the plant. I am sure the dry conditions have impeded the root development, but I was a bit surprised to notice this lack of roots. This is definitely not true in all fields or in all of the plants that I looked at in a field. I thought it was worth mentioning though.

So all in all, be patient to know how our wheat responded to the colder temperatures last week. We will not know for a while how the wheat has really responded. I have collected some wheat and put in the greenhouse on the Experiment Station and it looks to be in good shape while warming up. I will continue to water it to see if it initiates new leaf growth and let you know what I find. 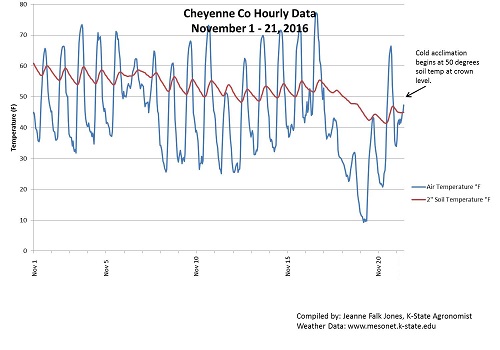 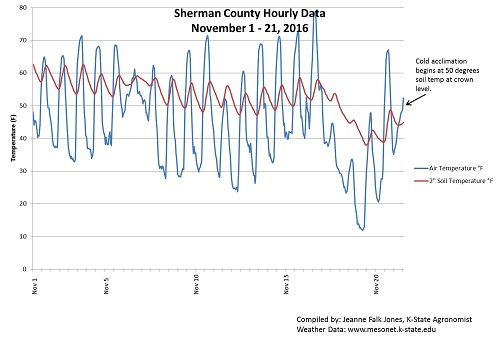 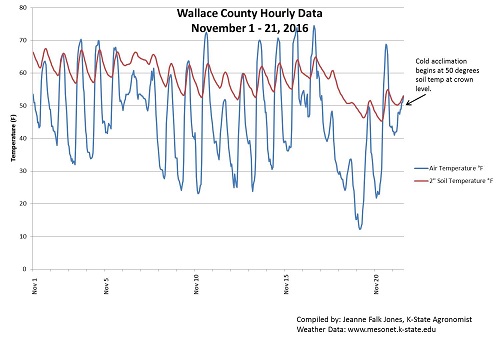